When I stepped off the plane in Puerto Maldonado, I thought the extreme heat pressing toward me came from the plane’s engines; the sweet-humid air suddenly surrounding me took me back to the controlled hot houses in Kew Gardens. My first few days in the Tambopata Reserve were punctuated by these perceptual mistakes. Coming from the UK, I kept finding myself comparing Western derivatives of tropical life to the real thing. Inhaling the saccharine scent of a flower that had fallen to the forest floor had me thinking of artificial air fresheners. Mortifying. But of course as I was confronted day after day with the scale and complexity of the rainforest, this way of looking at the rainforest soon wore off. The giant trees and their vein-work of creepers; the quietness of a two-toed sloth bathing in the last of the afternoon sunlight; macaws scattering over the dawn sky like flying rainbows; the monster sounds and smells of the peccaries; all these served to stretch my senses until “The New World”, the name given to the Americas by early sixteenth-century explorers, came to the fore. 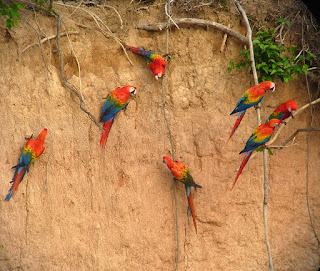 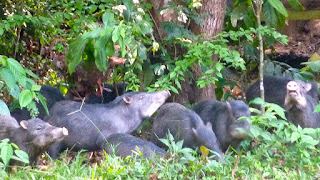 My poems focus upon the natural world and how its complicated relationships might shed light upon our own human relationships. I knew a month in one of the world’s most biodiverse rainforests would introduce me to a whole new range of species and relations based on mutualism, parasitism and commensalism. A couple of weeks into my residency, I happened across a very hairy caterpillar overtaken by what must have been up to a hundred wasp eggs. The caterpillar was still alive on the tree trunk, but zombied by such a burden. 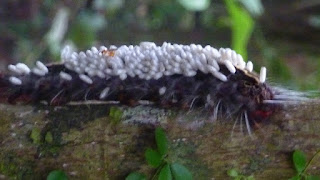 What astounded me about the environment I was seeing was not only these details, but the sheer physical matter of what was around me: the thickness of the leaves underfoot and the thickness of the leaves overhead; the huge vines loosely stitching everything together. Whilst I was curious about the small and intricate relations of species, I could not help but notice the atmosphere in which they took place: a place in which sex and threat dominate. This might just as easily be called “life and death” but such a phrase seems far too black and white in light of the rainforest’s incredibly colourful show in which pigment, form and movement might suggest a mating ritual just as it might suggest venom, poison, danger. Given it was the beginning of the rainy season, even the ladybirds (which I thought looked more like halved watermelons) were mating. Their rendezvous just metres from another discovery: a plant with leaves covered in thorns. 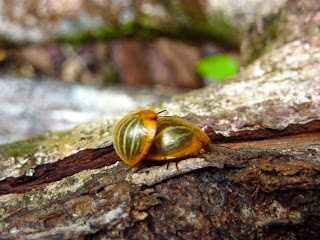 For a poet looking for a license to write about such exotic creatures, I had not expected how the rainforest would force me to confront the form of my writing – the very basics of stringing a sentence together. Common orders of grammar no longer seemed to apply. At first I thought this was because my own human voice was diminished: cicadas, frogs, macaws and howler monkeys (amongst others) spoke over all human noise at the lodge and on the trails. However, as I continued to write I started to wonder about the value and meaning of imposing literary rules and culture on such wildness. The rainforest’s prolific growth appeared antithetical to a full stop. What was the point of a stanza break or a comma when the subject of my writing suddenly flies away or I find it tangled inextricably around another plant? Returning to the UK with these thoughts, notes and poems feels like I am returning with riches.

A huge thank you to Nina Rodin and Abi Box and to all involved at Rainforest Expeditions. A special thanks goes to Laura Macedo, Emmaleen Tomalin and, for forcing me to practice my Spanish, Sabino Jaen.

The Trelex residency went above all my expectations. It was amazing to see just how productive one can be given the time to work and the right environment and Refugio has been the perfect place. I was on the residency for 3 weeks. This was the first time I had gotten a chance to focus solely on my work without other obligations. I began painting right away. My daily schedule consisted of getting up at 4 am and after a quick breakfast, I was on site painting from life. On most days by 10 am, a couple landscapes were completed and the rest of the day was spent walking the jungle and scouting out the next painting location.


Even before arriving in Peru, I knew that the clay licks (colpas) where going to be one of my main subjects. They attract an abundance of wildlife and the colorful Macaw parrots flock there by the hundreds. With color being the most important element in my work, it was surreal to see such visual lushness in person and to be able to capture it in paint. But this I couldn't have done without the help of the Rainforest Expeditions guides. They were beyond generous with their time and, despite being on a tour schedule, let me paint the colpas from life. It is these paintings that I am basing my new body of work on, as I feel that it is the colpa that most embodies the spirit of the Amazon jungle with its visual abundance and the nourishment it provides.


The lodge is a hot spot for career professionals from all fields. Refugio welcomes many projects and there is always something new to learn. Whether it was going on night walks to the light trap to find new species of Tiger Moths, re-releasing a baby snake after its photo shoot for a biology book or watching a drone film uncharted jungle canopy. The jungle not only supplied subject matter but also a nurturing work environment to create.


I was very fortunate that my stay coincided with fellow artists Emmaleen. Although we had different styles, our works complemented each other well and I enjoyed watching her process. We spent many days drawing and walking the jungle paths together.


The management team at Refugio were very supportive of our work and over our last week there they arranged a gallery reception for us (pictures of the opening below). The work from the residency filled a very long communal dining table. After dinner guests and lodge staff got to finally see what we were working on over the past month. It brought me a lot of joy seeing everyone examining the works and trying to decide which one was their favorite. Many recognized the places I painted and we stayed up late as the employees told stories about the giant Lupuna tree from my drawing or about how they could tell the exact time of day that I had painted the river. Upon my return home, I found that it was the people that I missed the most. 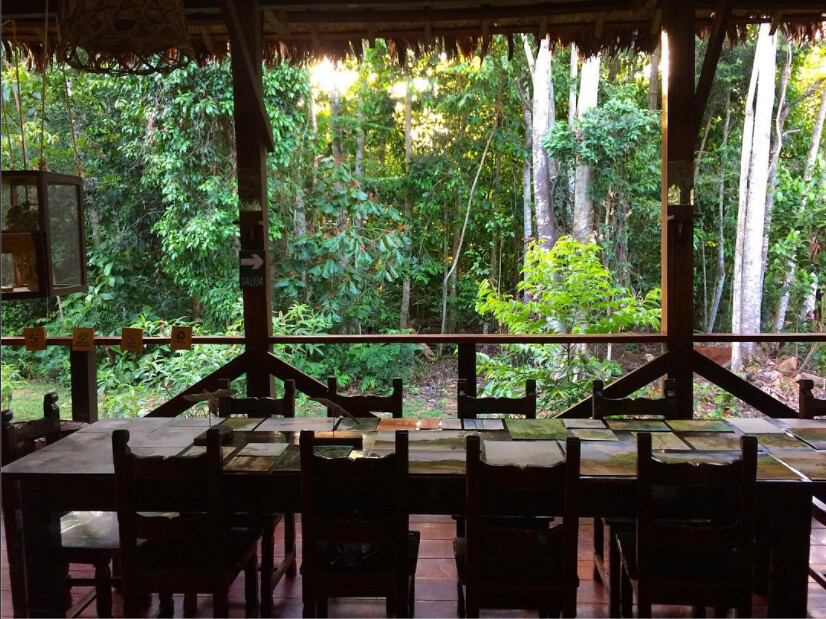 Trelex residency was a once in a lifetime experience. I still find it hard to believe that this opportunity came into my life. Working in the field challenged by painting abilities and the works completed while at the residency have already begun to open doors for me back home. Again, thank you Nina, for your generosity in creating such projects for fellow artists and Abi for all the care and support.

I have a strange ache in my heart thinking about the amazon rainforest, the mystery of the place, the unfathomable depths. I struggled a lot to write this blog as I’m still trying to comprehend my experience of the jungle, so I’ll begin with a little list of loose descriptions. 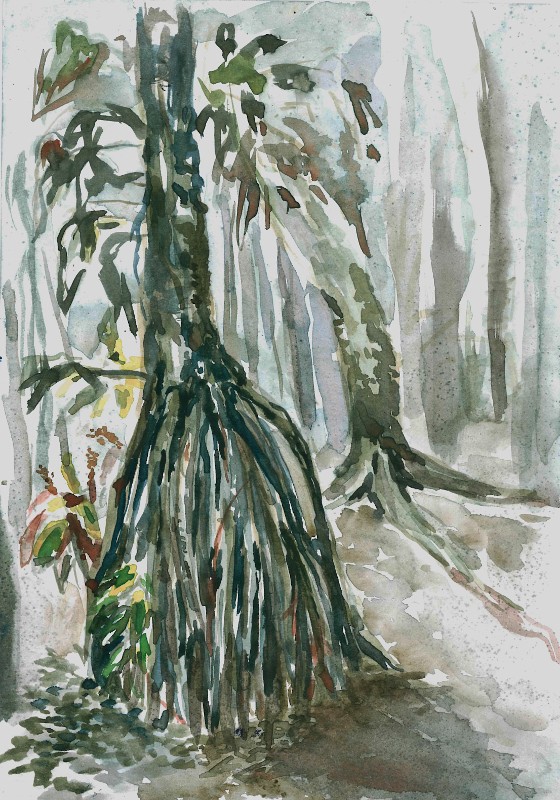 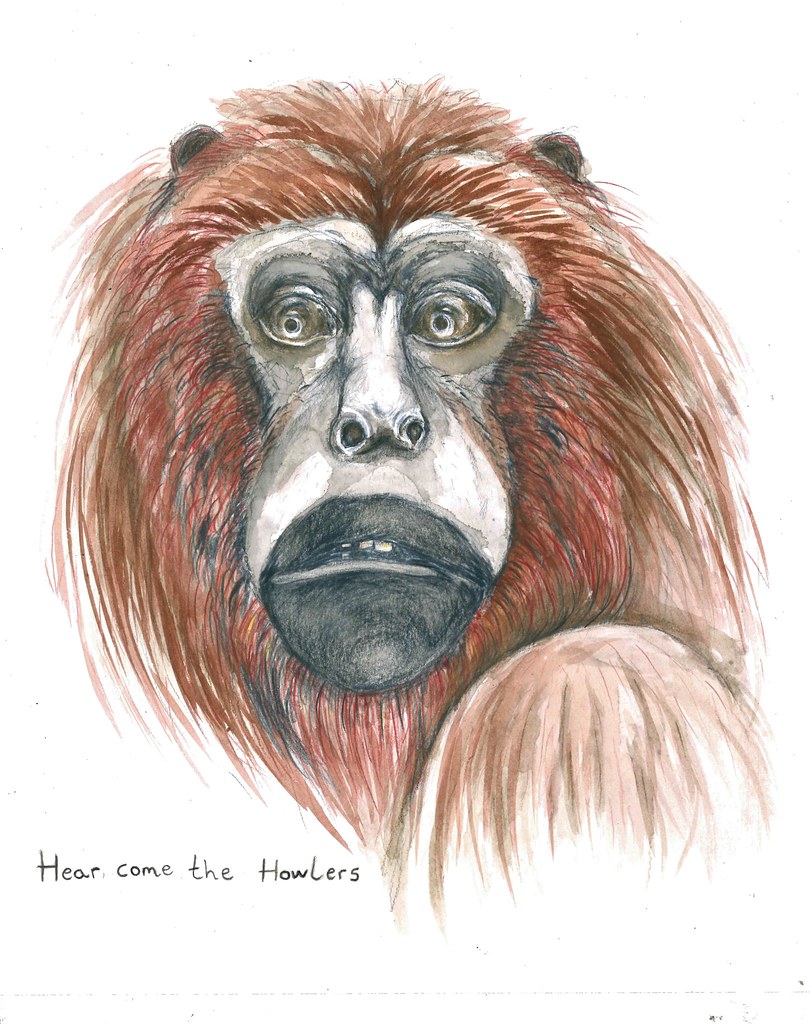 There were times when being in the amazon felt like an out of body altered mind experience. I lived in a surreal dream world for seven weeks, with extremely heightened emotions, punctuated by reality from members of my own species. I was lucky enough to spend time both at the Tambopata research centre and Refugio Amazonas.

Everything was stranger and more complex than my wildest imaginings. How does an artist even begin to capture a place like this? I wondered. I knew I had to start scribbling as soon as possible before fear kicked in. 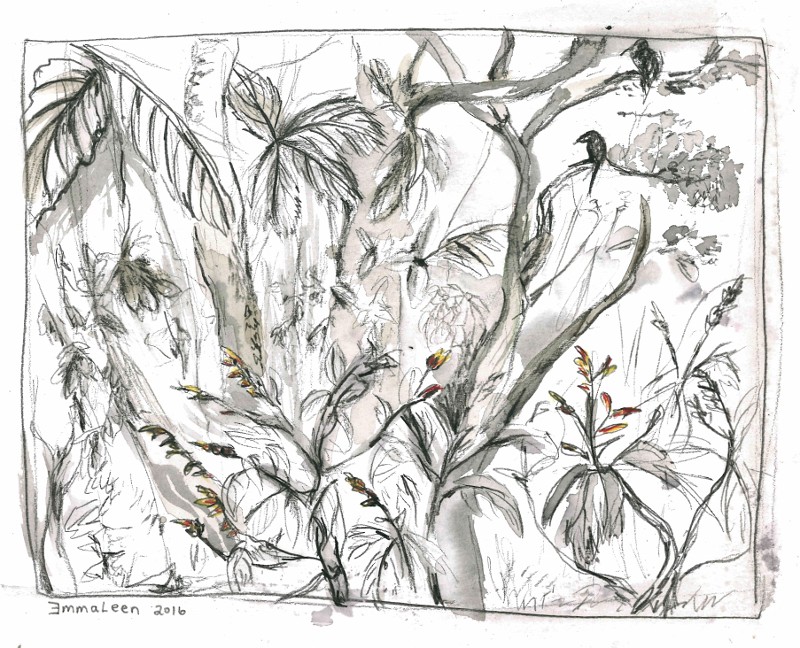 I began working in a sketchbook taking as many visual notes as possible and was fortunate enough to draw some animals from life. My absolute favourites were the two toed sloth and the howler monkeys. It was such a privilege to see these incredible animals let alone draw them. Although drawing through a telescope proved to be tricky.

I soon learned how difficult it is to see animals and how active of a process it is to spot them. The jungle slowly reveals itself if you are quiet, open minded and alert. I really enjoyed the daily visits from the macaws and peccaries and spent a lot of time trying to draw them in movement. Later on I started drawing hybrids of animals and began my own imaginary menagerie. 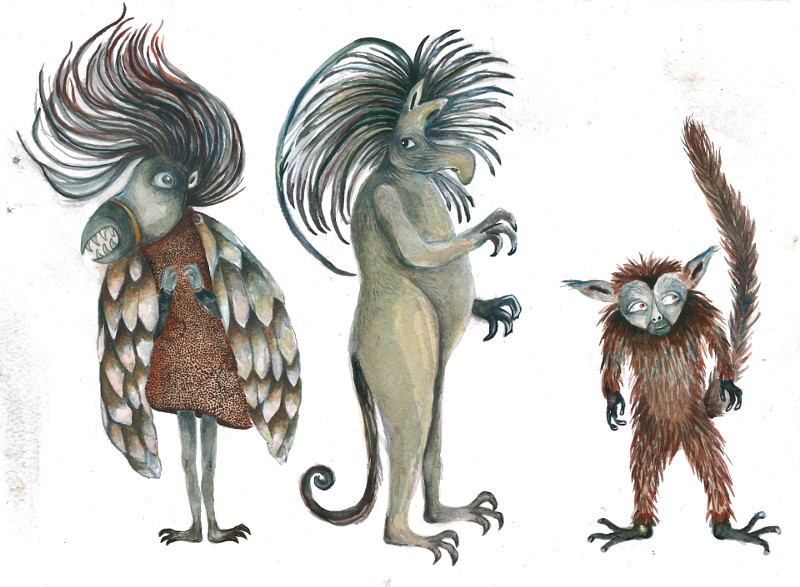 I slowed down in my last two weeks and spent a lot of time staring at trees, walking around on my own and trying to listen closely to the voices in the jungle. I enjoyed swinging on a hammock in the middle of the night watching the firefly fairies dart around in the enveloping darkness. This quiet absorption thinking time was just as important to me as drawing. 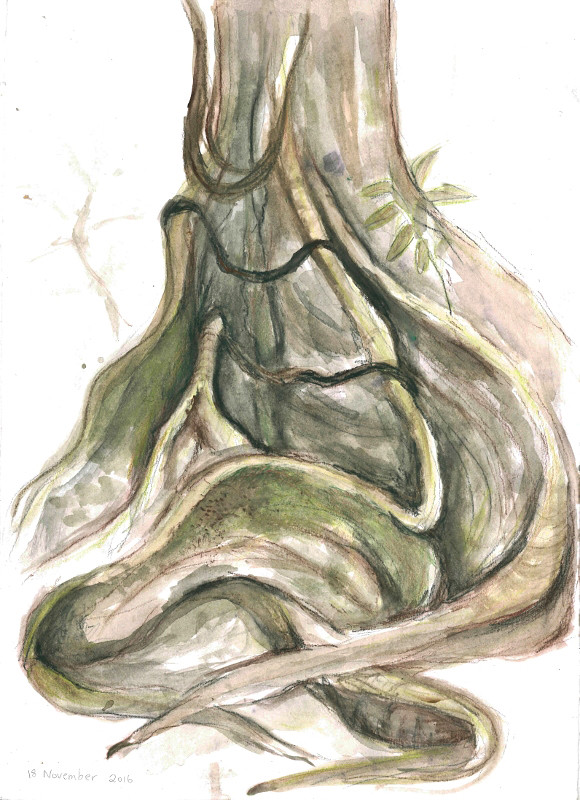 I saw and felt so much in the jungle and I am eternally grateful to have had this experience and to come home with countless ideas and invaluable visual information for new picture books.

I’m thankful I got to share my residency with the gentle, light-footed poet Isabel Galleymore who braved illness and the tough-as-nails landscape artist Taissia Basaira who grew a little pale but didn’t bat an eyelid after being repeatedly stung by a bullet ant. I’m also so glad I met the wholesome soul Laura Macedo (the guest service manager at TRC) who listened to me play guitar in the evenings. I learnt so much from these three women who challenged me each in their own way. I would also like to thank all the guides and rainforest expeditions for housing us and looking after us. Nina, thank you for starting such an amazing residency, Abi, thank you for all the leg work.