The conversation that started it all

In september 2014, I was invited with my family to take part in a course on Resilience at the Tambopata Research Center and Posada Amazonas, two lodges run by Rainforest expeditions. The course was hosted by Kurt Holle, co-founder of Rainforest Expeditions and Julia Novy-Hildesley, founder of Resilience in Action. Both have been honoured by the World Economic Forum as Young Global Leaders, as has my husband, the philosopher David Rodin, which is how we met.
The course covered topics ranging from Ecological Resilience, through organisational, economic and societal resilience to personal resilience. The rainforest around us provided a huge wealth of illustrations  for all three. The forest is full of species of fauna and flora that have developed extraordinary ways of surviving each other as well as the extreme demands of the climate and the poor soil conditions.

The challenging physical environment provided a beautiful background for the course participants to reflect on their own personal resilience, their reaction to stress, their ability to overcome crisis without loosing their true north and while staying calm.

We also met with representatives of the local community and with Ese-Eja leaders to hear about the challenges and changes they are faced with and how they see the future. Learning about problems associated with slash-and-burn farming and illegal mercury-based gold mining were stark illustrations of non-sustainable practices that undermine the resilience of the region, on every level: ecological, economic and personal.
Kurt Holle gave a very inspiring presentation on his own journey in setting up the lodges. An overview of the 25-year development to the present day can be found on the Rainforest Expeditions homepage here. What particularly struck me was Kurt's assessment of the importance of Trust in the initial negotiations with the local community. When initially there had been little or no trust between the parties, the drafting of a contract had been almost impossible. It took five years for the outside investors and the local community to reach a compromise and for a contract to be signed. Five years later again, large parts of the contract had become completely redundant or had to be edited out as the parties got used to working together and trusted each other completely.

After the talk, I approached Kurt and told him about The Trelex Residency which I founded in Switzerland in 2012. I believe it is the first artist residency to run without application forms and I reflected on how in some ways this is like doing away with the contract drafting part of the business. I don't believe that it serves anyone's interest if I have to trawl through dozens of application forms and artists have to compete to make all sorts of grands statements as to what they hope to achieve on a residency, which projects they hope to complete. I risk selecting not the best artist but the one most skilled at writing applications or with the most impressive CV.

I also risk promising a selected artist that the residency is particularly suited to the their needs, without knowing a great deal about the applicants. So instead, I give as much information as possible on what to expect and trust artists to decide for themselves if the Residency is suitable for their practice. They also decide when to come and for how long. And because we both take a equal risk, we have to trust each other to work together and the discussions and exchanges end up very rich as a result.

And so, having only known each other for a couple of days, we decided to see if we could set up a residency in the amazonian rainforest together. For Kurt, there will be the pleasure of supporting artists, of experiencing an environment he knows extremely well afresh through their experiences and for me, it will be a way of testing if the Trelex Model could in fact be applied around the world, wherever there is some spare room, generosity towards artists and interest in Art.

Email ThisBlogThis!Share to TwitterShare to FacebookShare to Pinterest
Labels: Feature
Newer Posts Home
Subscribe to: Posts (Atom)
The Trelex Residency in the Amazonian rainforest, at the Refugio Amazonas and other Rainforest Expedition lodges in Peru is the continuation of an experiment started in Trelex, Switzerland. It does not ask artists to fill out application forms, to outline an agenda for their stay, to commit to any particular form of production. Instead, artists should feel free to use their time in the forest in whichever way seems the most meaningful and productive to their practice. 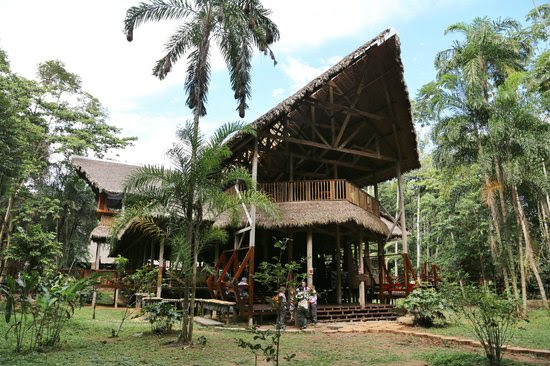