C1 is one of our favorite trails. It goes along the river north of the port and then wraps around along the bank of a turquoise creek as far as the big phaicus which is conveniently not that far from the lodge. A nice hour and a half long walk at the artist pace, and our chosen walk for the day. The researchers had a light morning of washing macaw diapers so we extend the offer of diversion. Carla with her machete and Tom with his cameras are happy to join.


We pause at an open cut in the line of trees guarding the river and begin our inspection. I had taken Tom and Melanie over here for a series of sweetheart photos just yesterday. Kristen, who begrudgingly serves as my second assistant (if she only knew how to read the light meter I'd make her first), spotted a beautiful tree snake just as Tom and Melanie were about to kiss.

No snakes today. We move on. A bluish fronted jackamar flies into the picture briefly and hope is regained. We exchange stories as we walk knowing full well the forest is listening. Tom is a few steps ahead at the next lookout. My face is following a finely drawn labyrinth of roots when the word otter drifts through my ear.

"No...well maybe..."
We all lean far over the torn earth to get a glimpse. About forty meters south are ripples spewing across the swift upstream current.

Without much consideration we run back to the beginning, yesterday's garden of Eden. I'm holding my camera high in one hand and my bag low in the other as I scramble through the vines and roots. I'm the last to arrive. Three sunny backs crouching hand on knee over the edge. I find my place next to them and there he is, the sweetest little face I ever did see. 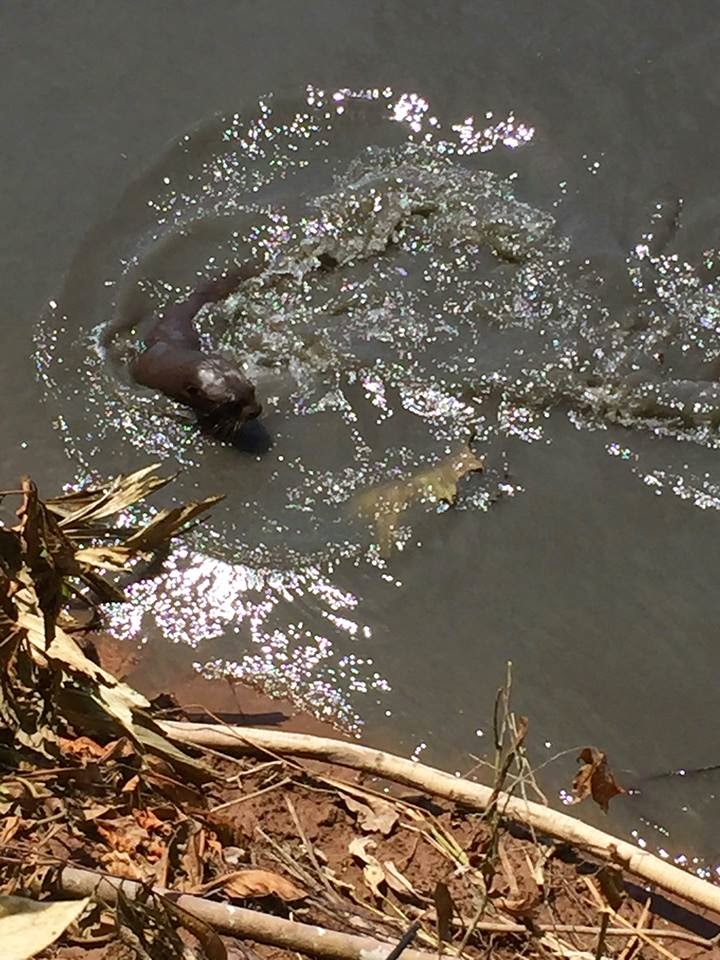 (I'm not sure but it almost seems as if he was annoyed we missed him when we first passed).

Without any hesitation we coo and kiss and devolve into baby talk as this rather oversized otter lifts himself onto the bank about two meters below. His wide toothy grin is useless in putting up that barrier you'd usually place between yourself and carnivorous jungle creatures. Pretty soon we're belly down on the ground reaching out to him.

After a series of urgent calls on the Walkie talkie we finally have what's left of the research team gathered. Our new four-footed friend is pawing below us on the bank. He gives us a chance to take a few more videos and snorts goodbye before slinking back into the river. Devastation found its why into our eyes as his bobbing head drifts away. 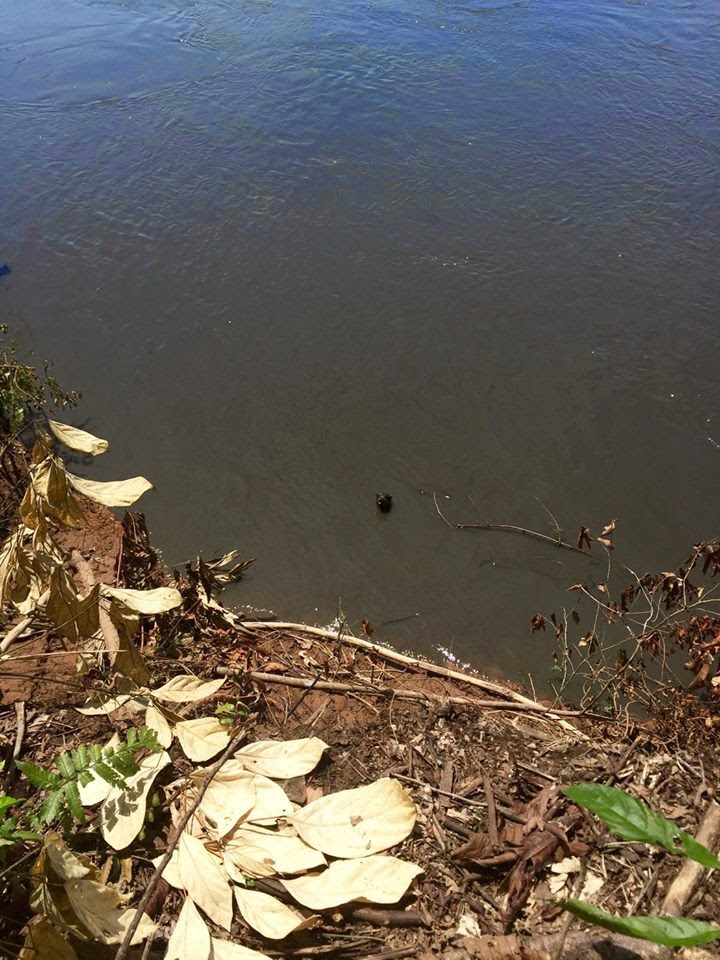 He's halfway to the river's other side. He turns to us and smiles. We break into enormous applause, crying, jumping up and down. I've never clapped my hands so hard. We don't stop. And nor does he. It's that moment when the Seabiscuits of the world pull ahead into first place. Pure Pride. Our otter is coming home.

Kneeing on the soft mud to welcome him, we tell him how much we love him and how much we never want him to go and he barks and whines and we know he feels the same.

That was yesterday. We still miss our otter. We've named him Percy even though the hard overnight rains mean that Percy has moved onto another scene of his life.

It's not the first time we've anthropomorphize the jungle wildlife. There is Wendy, the mouse opossum, who visits us at night. It's easier to believe there is just one Wendy. There is Tortellini the golden-toed tortoise, who talks very slowly of course. There are all the many Macaws. Mandy Lu and Chechewy love to take Selfies and the naughty Tabasco only likes the creamy center of Oreos. The monkeys don't have names, but they are definitely like you and me, perhaps just better at jumping.

Perhaps. Perhaps it's like this for some parents. We cannot help reflect something in ourselves unto the very young, innocent ones. Until they can talk our language, I'm pretty sure that we will continue to provide them with personas not of their choosing. We could also go into a discussion of racial superiority and/discrimination towards people with disabilities, but we'll save that discussion for later....

One thing is for sure, we are patronizing the species we talk down to, because somewhere we got it into our heads that these animals have less than a two-year-old's cognitive ability. I look at Darwin. His principal of natural selection admits that all species are equal to each other, a utopia without hierarchy. He wrote just short of including humans in this equation. But I believe in my heart that he thinks no higher of human's evolution than he did of his finches'. It is because we, as humans, believe that we are smarter than these animals, especially the cute ones. The challenge we face is learning to speak Otter, Opossum, Tortoise, Macaw and Monkey.

Is this a problem we need to fix? Does it hurt anyone to draw sketches of "parrot divorce court". Or design jungle animal emoticons? Or write our latest animal Yelp reviews? Should we stop creating memes of cute cats? Or even giving names and voices to our animals unless they can give their express consent? Do these animals even mind? Etc, etc...

For the moment, I'm am going to continue to finger paint an army of red-coated Macaws.

Tambopata provides the setting for this reflection, a place where species so specialized as the Taragana fire ant and the Tapir remind us they are just has highly evolved and superior as we are. And it just makes you ask, "what they think of us?"