My time in the rainforest has made me want to write poetically but I’m a terrible poet.  I'll start by running up a long list of disconnected adjectives like wild, unruly and tangled, alive, darker than I imagined, damp, dirty, close,.. until we climbed up the tower. 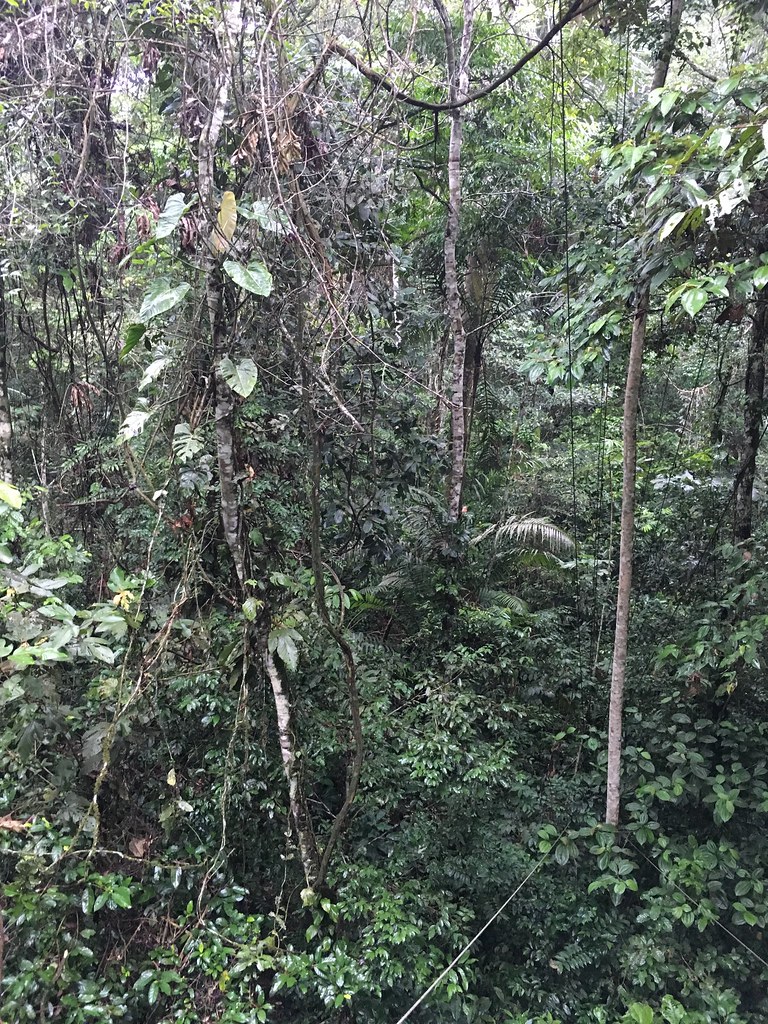 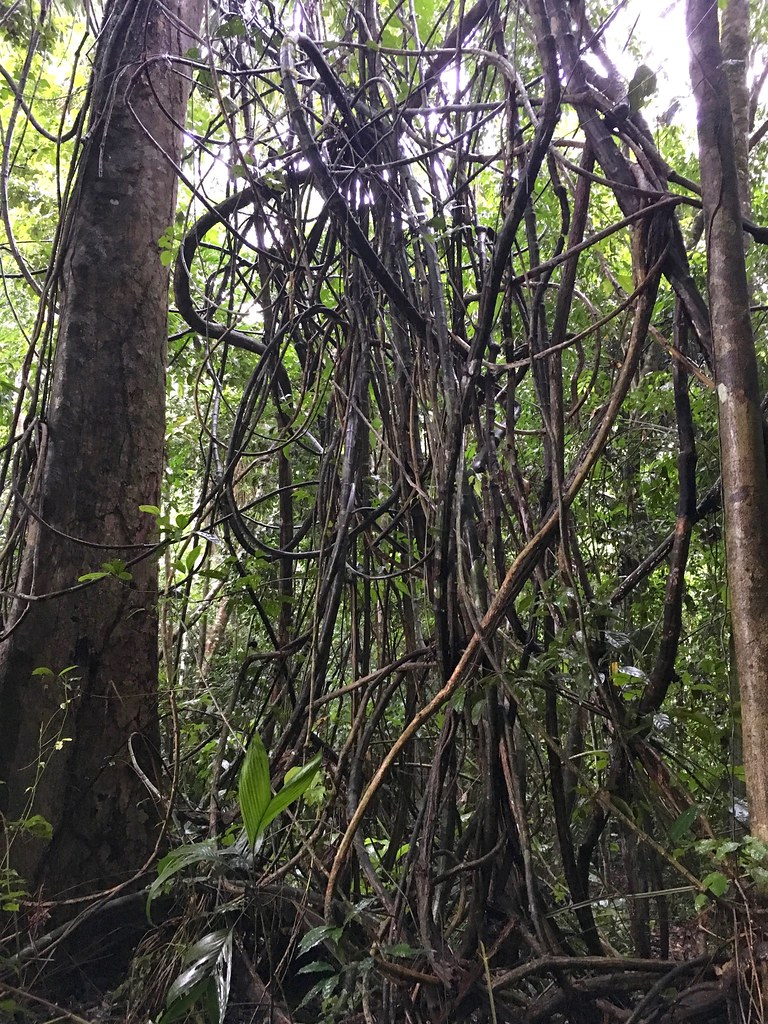 Looking out at the top of the tower, a manmade structure built to stand above the canopy, above all the mess and disorder lower down, you can see the surface of the tree tops, which look like broccoli, miles of broccoli.


Climbing up through the argument of branches into the clearing feels like swimming underwater then surfacing into calm and open air.  I climbed the tower three times during our visit, going at different times in the day: once in the morning to watch the light arrive, once in the evening where we watched the sun go down and another time, late at night when there was no light at all apart from the stars which littered the dark space like dust.


We often woke up before 5am, before sunrise.  Trekking through the trees, lighting up the pitch black with our head torches, the air thick with ticks, hums and hoots.  Slowly light would creep in as we would reach our destination.  One day we went to watch the pond wake up.  Everywhere where we went felt like we were trespassing, keeping very quiet and on the lookout constantly for interesting specimens or ongoings.  I didn’t realise that I had such an affinity for bats.  In the pond, on a plank of wood jutting out at an angle, there were four or five bats roosting (I just had to google ‘do bats roost?’ apparently they do) and there were another set flying laps of the pond getting ready to join them.  It was light by this time and we could clearly see them clung on upside down, twitching about and settling down for the day.

I also love squirrel monkeys now.  I won’t go on but I want to be one.


I have dived right in here, there’s so much to write about., a bit about how I came to be here.  The Trélex Amazon Artist Residency was set up in 2014, a conversation happened between Nina (founder of the Trélex Residency in Switzerland) and Kurt Holle (owner of Rainforest Expeditions) and subsequently artists began arriving at the lodges to stay as residents.  Two artists can come at a time during the rainy season, while there are spare rooms available, and so far eleven artists have visited.  A success story but it all happened so quickly.  We went out to talk in person to all the staff, guides, researchers to share our thanks and to highlight why and how much of a difference this opportunity makes to all the artists.


We were also able to spend time with the artists who were residents at the time, Ella, Colin and Maisie.  Over the course of the week we all took it in turns to do a short talk about our our work and our interests.  At Nina’s studio in Trélex, home to the first residency, she usually tries to do this in the first few days of an artist's visit, to kick start a conversation which will most likely continue throughout all the tea and coffee breaks to follow.  I’m always surprised by how much stuff is unearthed when we do this, what ideas and inspirations are making people tick.


Halfway through the trip I was taken aback to realise how much of a daily routine we had picked up.  One full of walking and exploring; I don’t think I thought that we would do so much of it.  Each walk we went on was at least a couple of hours and we often went on more than one; I was back in the girl guides.  The trip to the second lodge TRC, involves a six or seven hour boat ride.  Having looked at the area on Google Maps before we set off to Peru, I had a good picture of what we might look like from up above as tiny GPS dots amidst the sea of green.  It was an awesome feeling to know that on each walk we took, the forest surrounding us was never ending.


I found a fascination with a lot of things in the rainforest but the thing which kept catching my attention was the way distances appeared.  An interesting sense of depth is created by the humidity, the moisture in the air obscuring anything which lies a short distance away.  Tree filled backdrops are muted and misty creating an incredibly theatrical atmosphere.  Especially in the mornings, along with the howler monkeys eerily sounding off their territory, it often felt like a movie set. 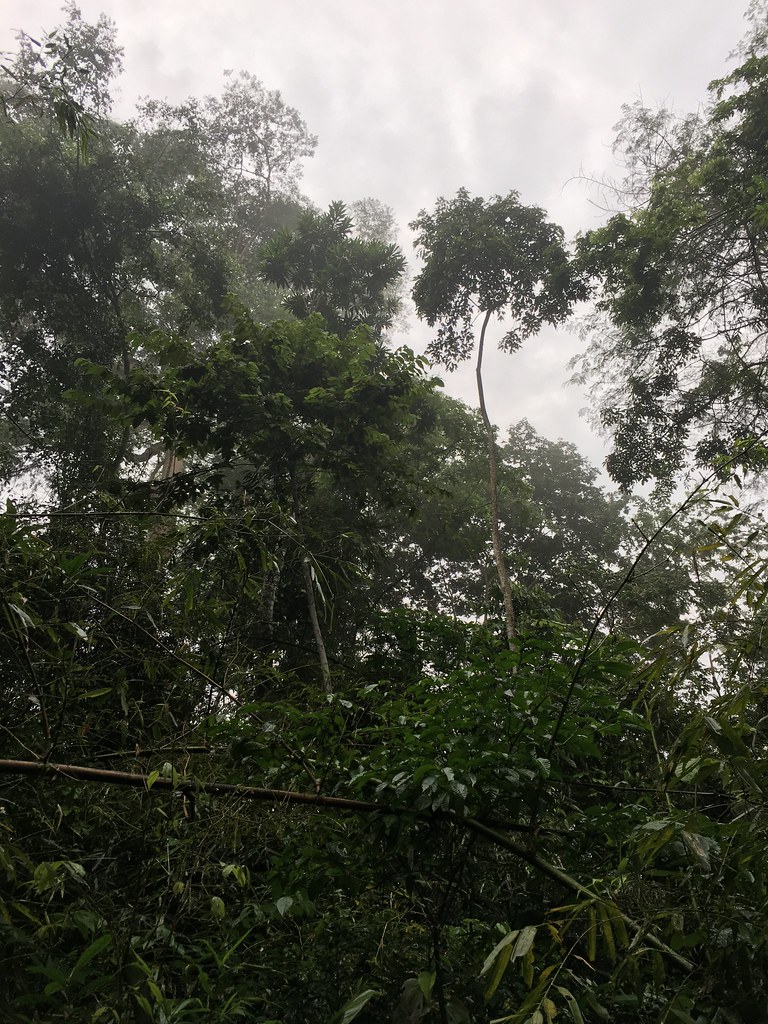 This unusual sense for depth was the thing I felt I could focus on within my work.  My painting has a lot to do with layering and the way things take up space, or not.  I found it difficult to work on anything which would portray all of this during the trip so I stuck to collecting my thoughts, taking photographs and making drawings… visual notes, of everything around me to take back to work on in the studio, back at home in London.

On the residency website, Nina has posted a recording that she made on her first visit to Amazonas Refugio.  She posted it as a mild warning to artists for how relentless the rainforest soundtrack is, day and night.  I’ve had it on in the background while I type because I miss it.

Thank you to everyone at Rainforest Expeditions for making this a thing.


Postcard to Fernando (our guide): “To the best pigmy owl impersonator in town. Thank you for taking me and Nina on walks, teaching us what not to touch, how best to cook fish in bamboo and how to milk a Capybara.  I will never forget looking up at the stars!  At Jupiter and the milky way.  I cross my fingers that I am able to return soon and that you can read my handwriting!  Abi xx”

This is extraordinary blog started by Min Kim while at the Trelex Amazon Residency. It is an on-going project as she continues to add to it. When you have experienced it, the rainforest stays with you for a long time.

Please visit the blog by clicking here. And remember to subscribe to the blog if you want to read subsequent additions.

And if, like me, you find yourself pulled into the unique poetry of Kim's worldview, I recommend you also look at her post from her time at the original Trelex Residency here.

Email ThisBlogThis!Share to TwitterShare to FacebookShare to Pinterest
Labels: Feature, From the residents
Newer Posts Older Posts Home
Subscribe to: Posts (Atom)
The Trelex Residency in the Amazonian rainforest, at the Refugio Amazonas and other Rainforest Expedition lodges in Peru is the continuation of an experiment started in Trelex, Switzerland. It does not ask artists to fill out application forms, to outline an agenda for their stay, to commit to any particular form of production. Instead, artists should feel free to use their time in the forest in whichever way seems the most meaningful and productive to their practice.