Last winter, I spent 87 days on residency in the southwest corner of Peru in the Tambopata National Reserve, an area acclaimed for having the planet’s densest bio-diversity. I brought Public 51 edited by Scott Lyall and Christine Davis on the subject of colour with extensive writing by Isabelle Stengers. While I was preparing to leave Toronto, I was in the early stages of planning this exhibition. With the upcoming limits of communication, I sent preliminary invitations to four artists: Amy Brener, Patrick Cruz, Scott Lyall, and Barbara Kasten. With the exhibition plan barely a sketch, their agreement was a performance of trust.

Initially, what held these artists’ practices together was a question of diffusion: an investment in the stuff of transparency and lightness, whether with the glazed ink and laminated glass within Scott’s works; embedded reflective elements and delicate films of silicon and resin within Amy’s sculptures; temporal quickness at play in Patrick’s unstretched canvases, where individual works act as vectors for the next; or the illuminated planes of screen and glass employed by Barbara in her sculptural sets. Despite the vitreous quality of many of their works, the layers used seemed to offer a resistance against ephemerality. Instead, each artist appeared to assert the relevance of materiality and technique. Through repetition, something light gained substance, like the weight of endurance.

The rainforest is heavy with the weight of its lightest entities: fungi…ants…butterflies. Every rainy season, for a brief duration, a parasitic plant emerges from the bark of a tree as tiny yellow fruit. Caterpillars arrive to relentlessly chew the plant, while a mass of ants stand as bodyguards to protect against would-be predators such as birds and larger insects. The ants are rewarded for their service with honeydew drummed from an exposed organ on the caterpillars’ back. When the butterfly finally presents itself, its wings blaze with an image of the yellow fruit. This image is produced without light; it is an image of home, an image of process called colour. Collectively, each entity survives in sympathy, held to the others through the dynamics of infection.

Likewise, the endurance of a work of art is either confirmed or denied by its power to infect and be infected by other artworks in both the space of exhibition and the space of history. This is not a matter of power as repression, i.e. the power of one entity to impose itself upon a lesser entity. Rather, the term infection is used as a matter of inciting an embodied relationship. What Stengers’ describes as the link between power and adventure. Effectively, the power of one being is gained by its ability to be receptive to the power of another being. The conceit of this exhibition is that―like interspecies relationships evident in nature―that which endures in culture is not self-sufficient. However while in nature, material reality holds subjects together. In visual art, it is subjective reality that holds objects together. It is the visitor’s awareness that forms the non-discursive link between art objects. Held together, each work valorizes the other, shapes the other, attributes a role to the other.

Composed of a relationship between four diverse artists whose respective practices are separated by cultural context, methodology, and media, the exhibition becomes a type of portrayal with the artworks loosely mirroring the role of plant, ant, caterpillar, or butterfly. However, it is a portrait that follows the rules of mimicry over representation. On the wall, Barbara’s work assumes the twinned roles of host and guest, both here and there. It is both a convergence of relational activities that belong to the studio―a space of becoming―and a photographic result intended for visual consumption. Amy’s Flexi-Shield series are suspended from the ceiling: talismanic dresses made from poured silicone whose slippery interface contains tools for survival. Hung in repetition, they function as equipment. A polymorphous defence system. Patrick’s installation eschews permanence in favour of dispersion. Laid on the ground, his improvisational canvases slowly secrete, transferring to the soles of shoes. Upstairs, Scott pursues his reflection into the gap of historical difference between painting and photography. Specifically the role of colour within these two modes of artistic expression as an eternal object that comes when called, that appears when wanted. Colour that matters. 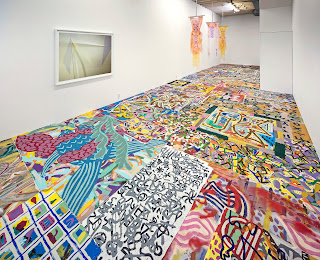 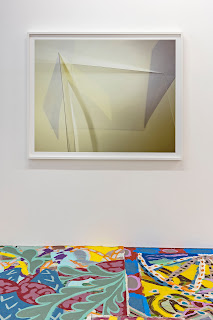 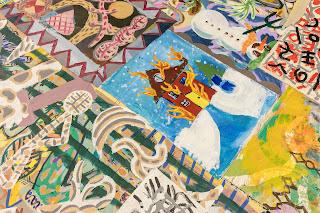 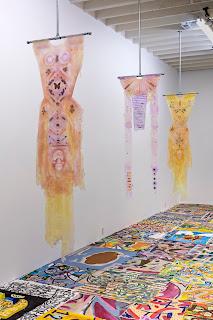 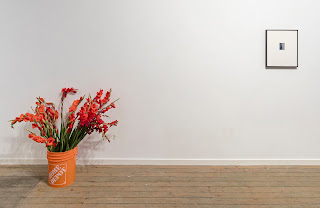 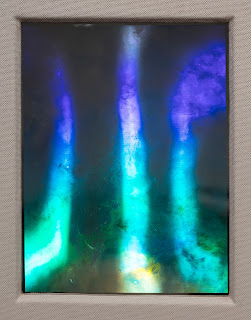 
Mystery of the Yellow Bulbs: Discovery in the Amazon of a New Caterpillar-Ant-Parasitic Plant Relationship by Aaron Pomerantz

FrameWork 9/16: Aryen Hoekstra on and, something like fire dancing