And when I wake in the middle of the night I see small lights, they flicker and come and go. Or they’re larger and they linger like that of a fairy, floating, gliding through the air. Or they creep and stalk something, then fade as though they were never there. They could be fireflies, or the eyes of a cat, or a man with a torchlight. The jungle is a magical place, but it can play tricks with your mind. It is hard to see what is real in the darkness.

Morning brings about a different world when the sun rises and the jungle awakens. The low rumbling, alike to a lions roar, echoes through the trees as the Howler monkeys wake and compete with the sounds of the Brown Titi monkeys who call back and forth between the males and females. If you’re lucky and quiet you may even catch a glimpse of them outside your room, which has no windows and no ceiling, only a high shared roof between the rooms. This is freedom. This is getting back to nature.

From the tower you can observe the parrots and macaws flying overhead at a height above the canopy. You can look down on the monkeys playing below, away from the bullet ants and wandering spiders, photographing the sunrises and sunsets. Everyday brings a new creature, even if they’re a different beetle, another bird, the novelty is refreshing and inspiring. Trees are abundant and everywhere, fighting for survival. Some fall down, whilst others grow and replace them. Brazil nut trees, Ceiba trees, strangler figs, all merge with vines, orchids and medicinal plants; the list is endless.
Daily walks to spot the harpy eagle or boat rides to visit lakes give sightings of piranhas and giant otters, or the clay licks where the parrots and macaws noisily gather en mass, but nothing can prepare you for the rare sighting of a jaguar as it disappears along the riverbank into the undergrowth.

One week the river is fast flowing and full of debris, the white caimans are rarely seen at this time, unlike the mosquitoes who will always find me no matter where I am. I feel safe confined within my mosquito net at night. The creepy crawlies can’t reach me here.

It is wet season and some days are just filled with rain. There is a calm and beauty to the sound. Regrowth and regeneration will follow. The present is forever changing. 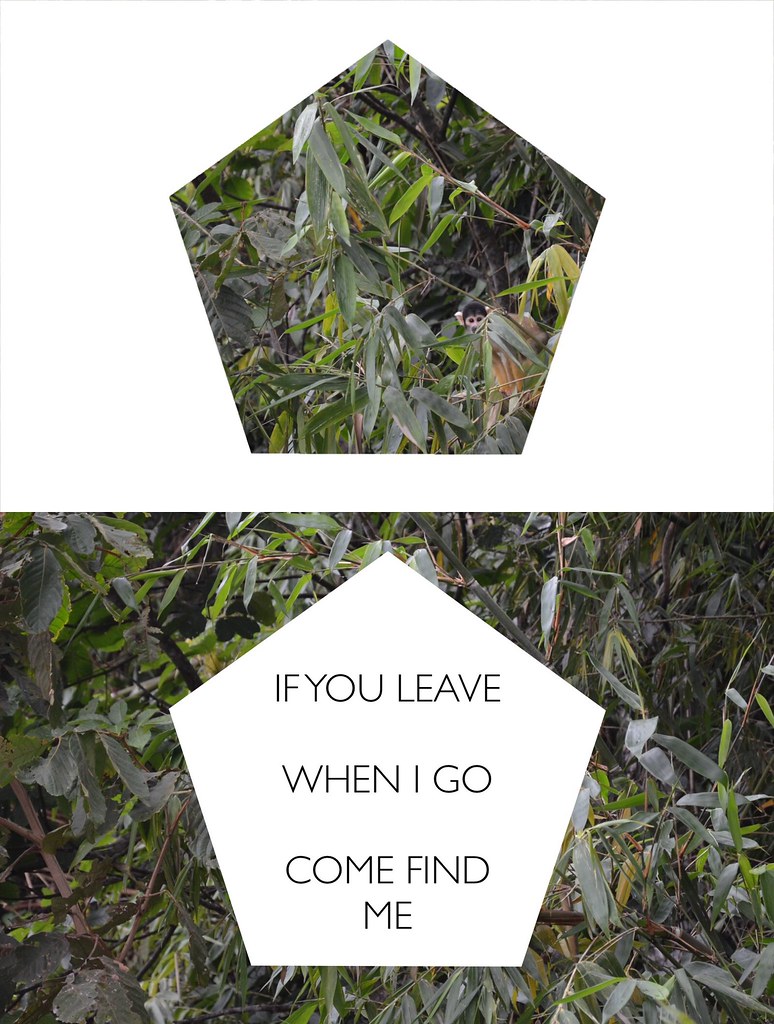 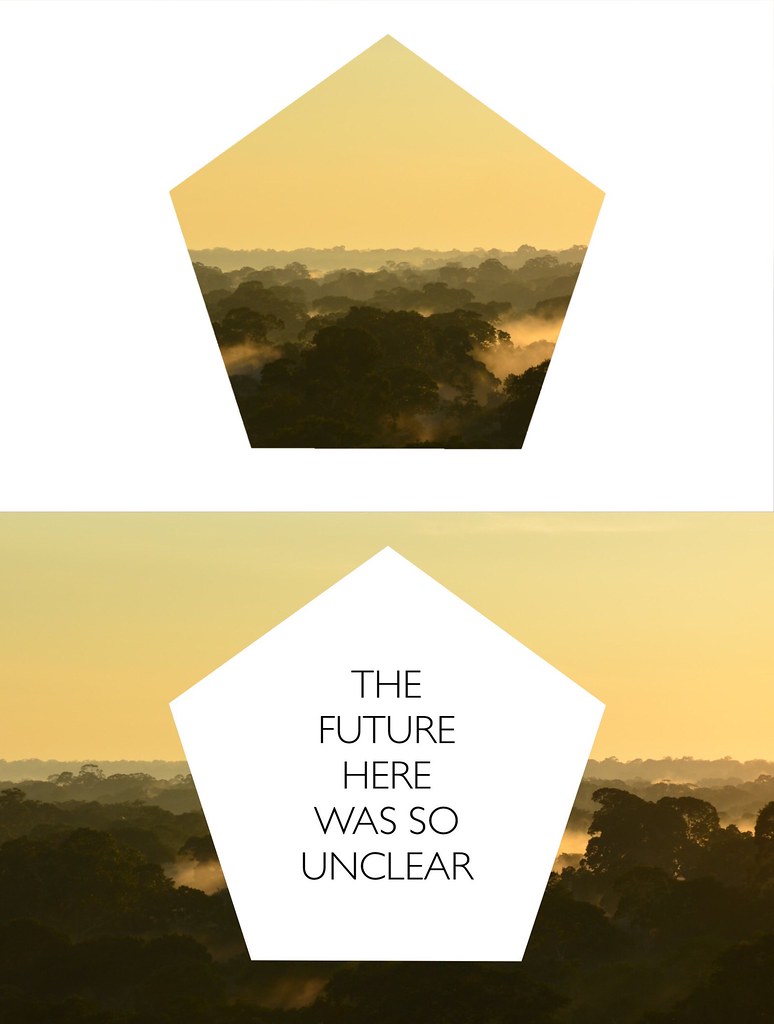 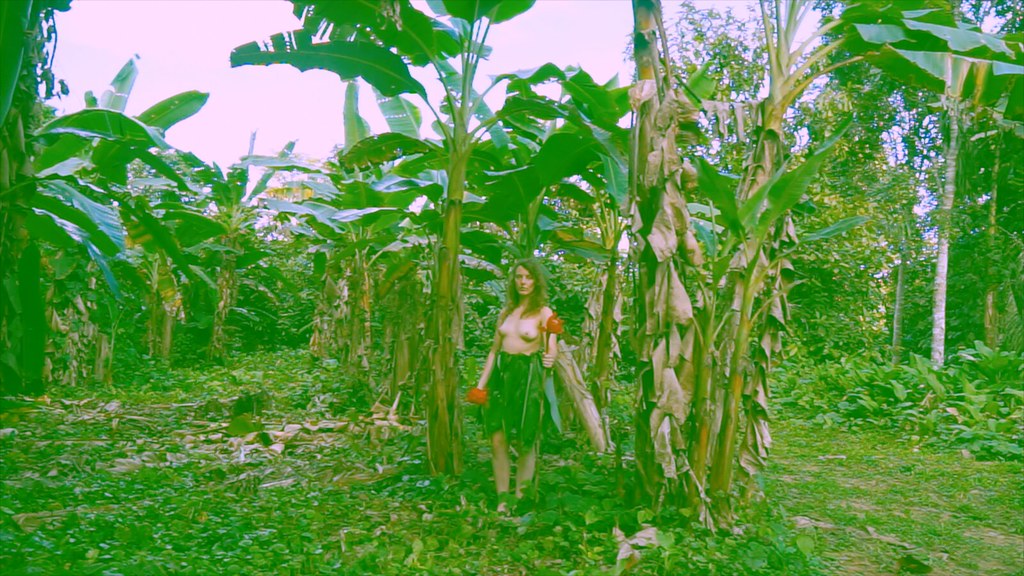 Swinging in a hammock in the Amazon Rainforest, within a lacquered wooden lodge, surrounded by mosquitoes, thick swelling heat and lush vegetation... I still have access to the internet. I am inside and outside of nature all at once.

Our devices are absurd objects that have become a part of us, we keep them close to our bodies and yet they encourage us to view ourselves from an external perspective. Perhaps we are more aware of being surveyed than we are of the feelings of our own bodies.

Everything in nature develops gradually, step by step and organically. Tarmac, television screens, office cubicles and glazed doughnuts are the materials of our time and we are growing with them:

Once upon a time there were bodies that worshipped plants. These plants provided these bodies with sustenance, minerals, nutrients and life. These plants were sacred, they were nurturing, healing, powerful and plentiful. But now instead of growing and anchoring themselves into the ground, these plants are potted and placed next to television screens or on top of refrigerators. They are exotic and homely all at once.

When we put our hands in soil, dopamine is released in the brain. This is so that when we need to go out and gather food, we feel good about the action, ensuring that we will survive another day in the wilds of the world. The same release of chemicals happens when we receive likes on Instagram.

You will never see yourself fully in three dimensions. Only others will. You will only ever know yourself as an image, through the screens, mirrors and reflections of the world. Perhaps it is more important to feel and be in your body than it is to think about it.

Once upon a time in the future there will be bodies that are able to suck up heat from the tarmac of the ground and modern materials will move through the layers of the skin to give them pleasure and strength. These bodies will spend time worshiping the digital world as if it were the sun and bearer of life. This world is the wildest of them all, it has the greatest calm and the greatest power as for the first time ever bodies are not separated by their physical constraints, instead they merge with each other, themselves and technology freely.

In this world there is no gratification in having too much. Be it objects or images there is potency in everything. In this world images are protected and sacred, images are made with quietness, dignity and respect.

Once upon a time in the future there will be bodies that sweep up the garden of the jungle in order to make way for the worship of the screen.

Everything in nature develops gradually, step by step and organically. Tarmac, television screens, office cubicles and glazed doughnuts are the materials of our time and we are growing with them.

Once upon a time in the future, life will be a journey of feeling.

Video and text made in the jungle by Rebecca Molloy, April 2017.